a
1
2
3
4
5
6
6
7
8
9
A
B
IMPORTANTTo read the national and local advice about coronavirus
CLICK HERE
CLOSE
Contact
Open Hours
Facebook
Vaccines
Destinations
General
Need some help?
Email Us
Ambulance
999
NHS
111
Online Shopping
0300 303 3380
Pharmacy
Mackenzies Pharmacy
01482 343 713
Social
Facebook
* Please be advised that we record all incoming and outgoing calls. This is for training and quality purposes and to protect both our staff and patients
Usual
Opening Hours
Monday
09:00 to 18:00
Tuesday
09:00 to 18:00
Wednesday
09:00 to 17:30
Thursday
09:00 to 18:00
Friday
09:00 to 18:00
Saturday
09:00 to 17:30
Sunday
Closed
Holiday
Opening Hours
Our opening hours may vary from branch to branch. Visit our branches page to see the opening hours of your nearest branch.
See Branches
Cholera
Diphtheria
Hepatitis A
Hepatitus B
Japanese Encephalitis
Meningitis A,C,W, and Y
Polio
Rabies
Tetanus
Tick-borne Encephalitis
Typhoid
Yellow Fever
Africa
Antarctica
Asia
Australia & Pacific
Caribbean
Central America
Europe
Middle East
North America
South America
BLOGS
What we have to say about your health and well being
Search...
BLOG
What we have to say about your health and well being
15
Jul 2020
Who needs to wear a facemask and what are the rules

Coronavirus: What are the rules for face masks or face coverings?

Wearing a face covering will become mandatory in shops and supermarkets in England from 24 July.

They are already compulsory in Scotland - but different rules apply across the UK.

What are the face coverings rules in shops?

It will be compulsory to wear a face covering in shops in England from Friday 24 July.

The rules will be enforced by the police, rather than shop workers. The National Police Chiefs' Council says guidance will be issued to officers once the details of the new legislation are known.

People also won't be required to wear a covering in places where it's not practical - such as in a pub, cafe or restaurant - according to Mr Eustice. Children under 11 and those with certain disabilities will be exempt.

In Scotland, it's been a requirement to wear face coverings in shops since 10 July. Anyone not wearing one can be fined £60 fine (reduced to £30 if paid within 28 days) for a first offence.

People with certain medical conditions or disabilities, and children under five are exempt in Scotland.

Shop staff do not have to wear them, but it is "strongly recommended" in the guidance that they do. 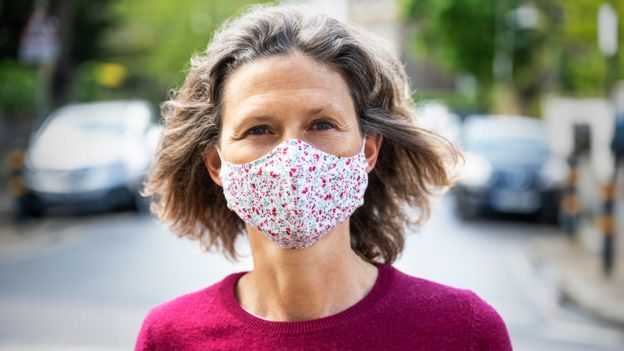 Why are the rules in England changing?

Since mid-May the public in England have been advised to wear face coverings in enclosed public spaces, such as supermarkets, where it can be difficult to follow social distancing rules.

Prime Minister Boris Johnson says there is growing evidence that wearing them helps protect individuals and those around them from the virus.

Making it compulsory sends a stronger signal to people about their value.

However, Health Secretary Matt Hancock has said there are no plans to make face coverings mandatory for office workers.

What are the face covering rules on public transport?

Since 15 June, anyone travelling by bus, train, ferry or plane in England must wear a face covering.

Some passengers are exempt from the rules including:

If it is "reasonably necessary" for you to eat or drink, you can remove the face covering to do so.

People can be refused travel if they don't follow the rules, and can be fined as a last resort. 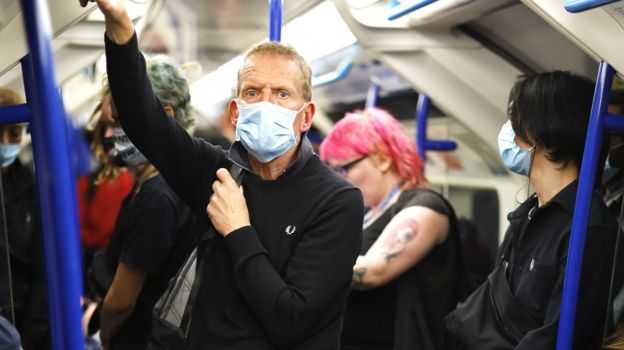 In Scotland, it is also compulsory to wear face coverings on all public transport

Coverings will also be made mandatory on public transport in Wales from 27 July. These coverings should be three layers thick. It's also recommended that coverings are worn whenever social distancing is not possible.

The wearing of face coverings on most buses, trains and ferries became mandatory in Northern Ireland on 10 July.

Where am I supposed to get a face covering?

The government has been careful to use the term "face covering" rather than "face mask" - with surgical masks kept for medical use.

The BBC has created a guide on how to make your own face covering. The government has issued its own advice too.

How many people wear face coverings?

There is a lot of variation around the world when it comes to wearing face coverings in public, according to polling company YouGov. 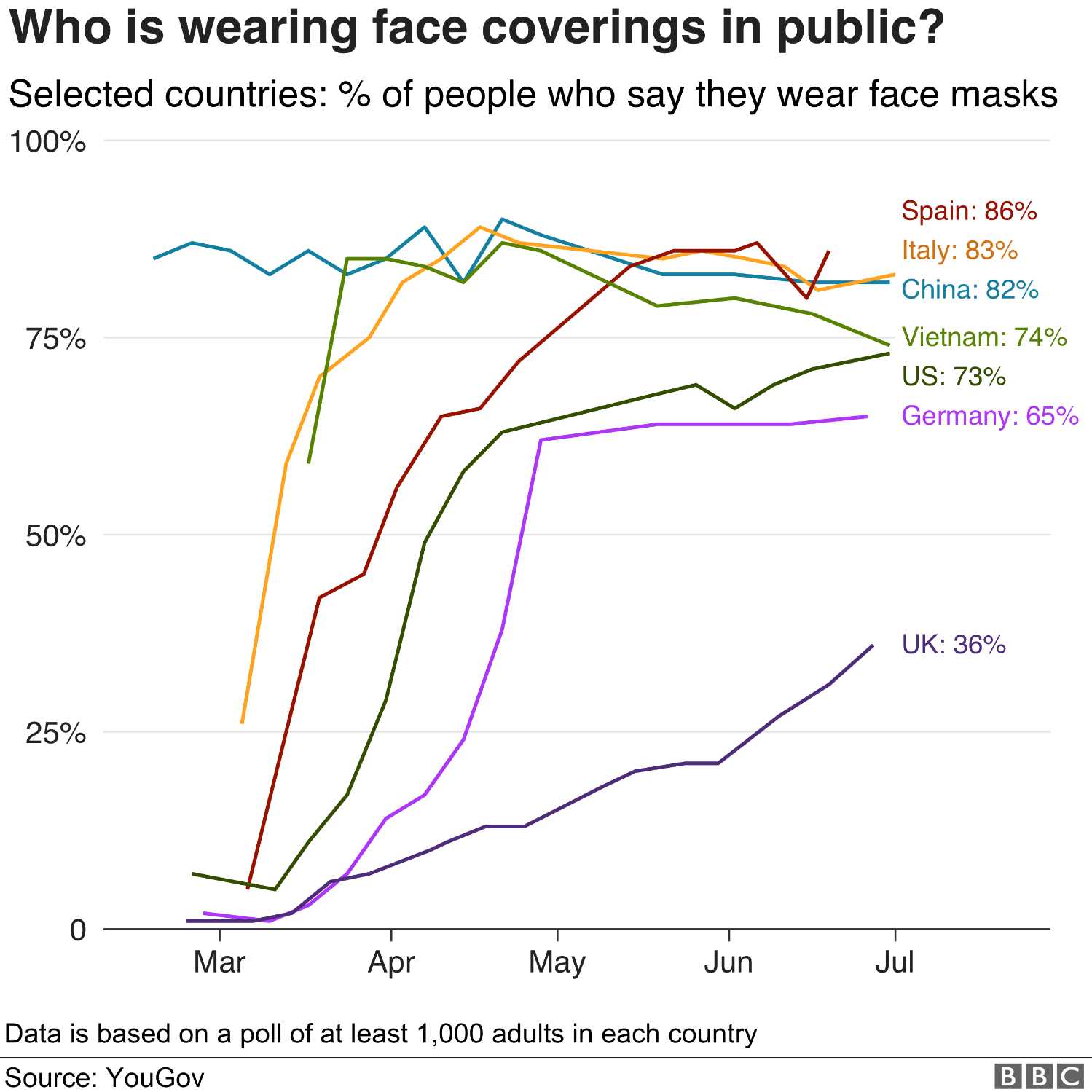 People in Asian countries are most likely to say they wear them. In Singapore, where it is an offence not to wear a mask outside your home, 90% of people do so - the highest rate in the world.

In the UK, just 36% of people say they wear a mask in public - although this has been steadily increasing.

The data comes from surveys run in nearly 30 countries.

World Health Organization (WHO) advice says non-medical face coverings should be worn in public where social distancing is not possible.

Coronavirus is spread when droplets are sprayed into the air when infected people talk, cough or sneeze. Those droplets can then fall on surfaces.

The WHO says there is also emerging evidence of airborne transmission of the virus, with tiny particles hanging in aerosol form in the air.

Homemade cloth face coverings can help reduce the spread from people who are contagious but have no symptoms or are yet to develop symptoms. This is called asymptomatic or presymptomatic transmission.

Scientists in Singapore suggest the contagion risk is especially high in the 24-48 hours before an infected person is even aware they might have the disease.

Taking a face covering on and off can also risk contamination, the WHO says.

CONTACT
121 - 123 Chanterlands Avenue
Hull
East Riding Of Yorkshire
HU5 3TG
Contact Us
01482 343 713
INFORMATION
Premises GPhC Number
1087199
Superintendent
J E Mackenzie (2019260)
OPENING HOURS
BRANCHES
See All Branches
Cookie Policy
Privacy Policy
Terms And Conditions
Local Shopping Policy
Copyright 2021
Powered by www.thepharmacycentre.com
and www.medicinechest.co.uk
We were unable to connect you to our system.
Please click to try again.
If this problem persists contact info@thepharmacycentre.com
This website is no longer available, If you are the pharmacy owner, please contact The Pharmacy Centre to re-activate.
Don't show this again
Don't show this again
MENU
Main Menu
No Results
Shopping Categories
More Categories
In Store Shopping
More Products
Online Shopping
More Online Products
Health
Search Health Articles...
Search Medicines...
Coronavirus Advice
Admin Tools
Settings
Volume
Text
Device
Your Basket
In Store
Total
Checkout
Online
Total Excl VAT
VAT
Total
Checkout
Live Chat
Live chat is currently disabled. Toggle the switch to make yourself available for live chat.
Active
Pending
Type your message and press enter to send, An administrator will reply to you shortly
Chat...
Send
End Conversation
Back to Chats
Please select a branch to view orders, patients and history...
Website
Select Branch
Order In
Patient Orders
Pending Orders
Complete Orders
Order History
Patients
Register Reminders
Statistics
Configure
Log Out
Speciify which content you wish to enable on your site
Flu Pages & Content
Medic Spot Covid Test Pages & Content
Medic Spot Travel Planner
Online Doctor Pages & Content
Testimonials Pages & Content
Travel Clinic Pages & Content
Back
Next
What do you want to do?
Visit the website home page
Visit the website page for my pharmacy
Change my pharmacy
Back
Next
1
2
3
4
5
6
7
8
9
10
11
12
13
14
15
16
17
18
19
20
21
22
23
24
25
26
27
28
29
30
31
Back
Next
Please provide your email address you use to login to your account, we will then send you a password reset code.
Email
Back
Next
Back
Next
The following list shows all the items you have placed orders for, click on an item to see all the dates you have placed an order for the item.
Back
Next
Please provide a little more information to finish setting up your account...
Which of our stores you use
Are you registered for GP online services?
The surgery you are registered with
Are you exempt from prescription charges?
A contact telephone number
Your home address
Messages
No new messages
Your surgery does not currently allow you to place orders via GP online services. Please contact your surgery to resolve this or click here to unlink.
Online prescription ordering is not currently enabled for your branch. You can still store your items and set reminders to re-order.
You haven't set up any reminders to reorder your prescription items. Click here to setup reminders now
Your recent prescription orders
What do you want to do?
Change User
Order
Manage
Pharmacy
History
Purchases
Log Out
Please enter your login details to access your account...
Email
Password
Keep me logged in
Help! I have forgotten my password
Back
Next
To keep your password secure you will periodically need to change it. Please provide a new password to login to your account.
Email
New Password
Back
Next
If you have an NHS account you can use it to login to your account. By doing so we can automatically collect information required to connect to your GP online.

You will need to give NHS login consent to share your information with us for the purposes of creating your account with us, ordering repeat prescriptions, sending your GP a message and seeing the health information your GP shares with you